Sharx Security is an authorized reseller of Luxriot VMS and EVO software, which in our opinion is one of the most reliable and feature-rich professional grade Video Management System software packages that we’ve ever encountered.

The new 64 bit Luxriot EVO is available in a complimentary edition, free of charge and without time limits, for up to 9 cameras running at up to full HD 1920 x 1080 resolution. Please note that the free software does not come with any tech support.

The software is very sophisticated but at the same time the setup is definitely not intuitive. The following set of screenshots will illustrate step by step how to download, install, and configure the software for Sharx Security consumer and professional cameras, including all current generation SCNC and HTNC series cameras.

To start the setup of the free software, go to http://www.luxriot.com/downloads/product-downloads/ and download Luxriot EVO complimentary edition: Next, run the downloaded software: Needs approval of license agreement, even for the free version: If you had a previous version installed and are just updating, you’ll see an option to preserve your previous license. Otherwise you can create a new one.

You’ll see that the 9 camera free license is not just a temporary trial, expiry date is “Never”. While “End of support” is also “never”, it doesn’t mean that anyone offers any  support for the free version. It just means that there is no scheduled change in support status. And this time after you click “Next”, it will start installing: Then the software is installed and you would proceed by clicking “Finish”: Next is the “Server Setup”. Defaults are ok: And that’s it for the server: Now the “Luxriot Console” is used to configure a few things, starting with selecting a password: It needs to be 8 characters, with a minimum of 2 upper case and 2 lower case letters and 2 numbers, for example you could type ABcd1234

Whatever password you choose, please write it down exactly as you’ll probably have to enter it several more times for the configuration.

If you forget the password, simply uninstall and re-install the software using the Windows control panel. So far everything has been pretty straightforward and not really worth so many screenshots to explain. But now come the tricky parts.

Luxriot EVO offers to scan your network to find devices, but since that part doesn’t work, you would NOT proceed to Step 1 here, and instead you would click on Exit as shown with the red arrow: Once exited from the somewhat useless “Setup Wizard”, the Management Console shows a lot of configuration choices, including a bunch that wouldn’t even be available in the free version of the software. Click on “Hide features restricted by license”: And this will now show a cleaner interface: Now comes one of the really important steps. The best way to configure Sharx Security cameras is not by selecting Sharx or ONVIF from the menu, but by selecting “(Generic) RTSP Compatible”. The reason is that this gives us more flexibility to tell the software the best way to stream video from the camera, without relying on any decisions or assumptions made by the software. Then it will need a few details, including of course the IP address of the camera which is configured by clicking on “Network” as shown below: The username is admin and the password is whatever you set for the camera.

You could also connect to a remote camera the same way. All you need is the remote IP address or hostname, and the port would typically be 8150 for the first remote camera. Once filled in, after you click on OK the configuration screen should look similar to the example below, of course with your camera’s IP address. Next you would click on “”Channels”, and then on “Channel configuration” as shown below: Finally we’re getting close to the second really important and non obvious configuration step. Click on the RTSP tab shown below: For all current Sharx Security professional HTNC series cameras, keep the default port 554 and enter the following info instead:

After these values are entered, click on OK, and then the channel configuration is done and you’d click on OK there too: Now the console screen should look like this (except of course with your camera’s IP address): This concludes the Sharx Security specific setup for the first camera.

And you can then add more cameras, and see them on your computer screen by opening the LuxRiot EVO Monitor application, for which an icon should have been installed on your computer’s desktop already. Be sure to log in with the password that you set up earlier.

In the view below, the camera on the left is one of the previous generation consumer cameras and on the right is one of our new professional cameras. Even at this very low resolution image, the increased sharpness of the professional grade camera is apparent You can now refer to the Luxriot documentation for info on enabling recording and all the other interesting features of this software. Tech support is available for paid versions of the software purchased from Sharx Security: We help with installation and all camera specific setup, and Luxriot helps with general operation questions. Feel free to ask us any questions about the setup, and we will try to improve this setup guide accordingly. 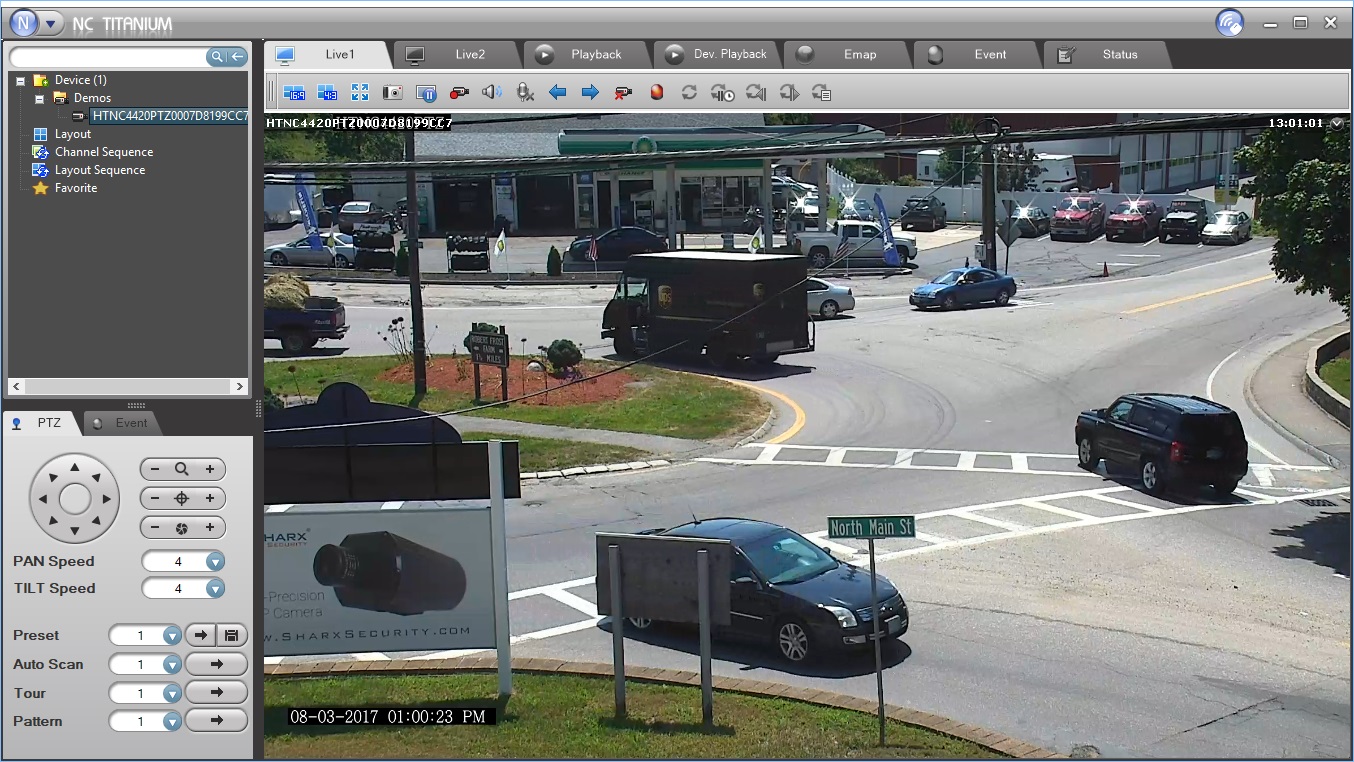 The new Sharx Security HTNR16560 records and displays up to 16 cameras with a total of 240 frames per second (fps). Full specifications are here: NVR Flyer Setup involves only a few steps. When connected to power Read more…

Sharx Security HTNC and SCNC cameras now support ONVIF and this allows the cameras to be used with various software even if there is no dedicated driver. Here is an example with Netcam Studio: We Read more…